VARAC had a great weekend of racing at Calabogie Motorsports Park on August 22&23, 2015 as part of the MCO Ted Powell Races.

Check out our photos! 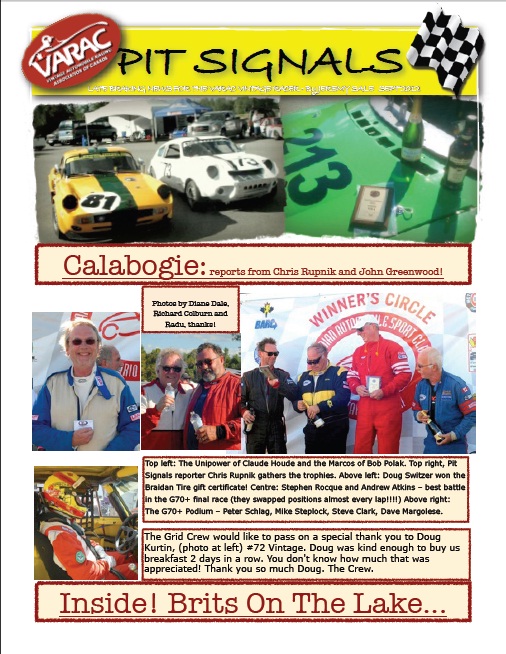 The September 2012 edition of VARAC Pit Signals by Jeremy Sale has been released! Click here to download your personal copy. Features this month include:

Richard Colburn – MCO Photos – Website – Contact
Click on the samples below to link to Richard’s separate Vintage/Historic and Group 70+ albmums. Richard’s photo albums are posted for your enjoyment and use, please credit Richard Coburn when used

TORONTO, ON (August 28, 2012) – VARAC Vintage/Historic and Group 70+ cars head to the picturesque Calabogie Motorsports Park this weekend to participate in an action packed weekend of racing as part of the Ted Powell Memorial Race Weekend, hosted by the Motorsport Club of Ottawa (MCO). This event will be the sixth race to count towards the VARAC Drivers’ Championship where we anticipate seeing many of our distinctive cars from both Quebec and Ontario. One of the benefits of Calabogie Motorsports Park being located just outside of Ottawa is that this weekend is a “not-to-be-missed” event for both Quebec and Ontario competitors of each regions’ provincial championships, delivering to fans an unprecedented array of racecars.

The full weekend schedule is available at CASC-OR

Complementary tickets are available at CASC-OR

VARAC is the Vintage Automobile Racing Association of Canada whose members share a desire to preserve, restore and race historically significant cars in a form as close to the original specification as possible. We race cars made in 1989 or earlier in Ontario and Quebec. The highlight of our season is the Canadian Historic Grand Prix held annually in June at Canadian Tire Motorsport Park. The 2013 CHGP will feature Porsche.