TORONTO, ON (July 28, 2015.) – The Vintage Automobile Racing Association of Canada will be competing this weekend, Aug 1 – 2, 2015 at Canadian Tire Motorsport Park in Bowmanville, Ontario in the BARC Canadian Touring Trophy Races. This is the fifth event in the 2015 CASC-OR Race Ontario Championship and third event in the VARAC Classic Drivers Challenge.

The test day is Friday July 31, then the racing and fun begins Saturday and Sunday August 1 and 2. This event at CTMP is a points paying race for VARAC Classic cars (Group 70+ and Group 90).

“The new race class of Group 90+ was added in 2015.” says Del Bruce, VARAC’s President and Race Director. “We have expanded the eligible age of historic race cars to include the racing period of 1990 to 1994. We believe this is a very positive move in response to the interest in newer cars. We hope to see a good number of these cars joining us at BARC and in the future”.

The British Automobile Racing Club – Ontario Centre (BARC-OC) was founded in 1959 by a group of motorsports enthusiasts in the Toronto area. BARC-OC is the only chapter of BARC outside the UK. Mosport (CTMP) is an iconic, world famous race track, both technically demanding with challenging corners and impressive elevation changes.

In addition to the VARAC cars there will be lots of other classes and fantastic races, and the weather looks extremely promising. We look forward to a great weekend of racing!

The July 2015 edition of VARAC Pit Signals by Jeremy Sale has been released! 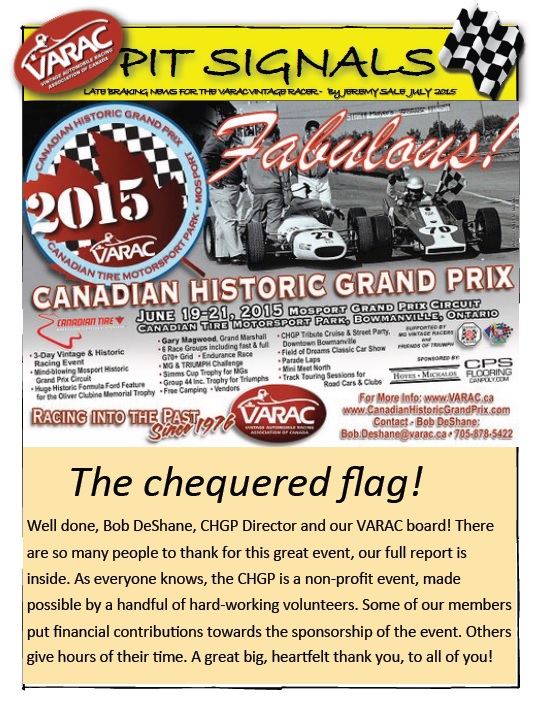 TORONTO, ON (July 16, 2015) – The Vintage Automobile Racing Association of Canada (VARAC) is excited to be returning to Shannonville Motorsport Park after a one-year hiatus from this venue.

“It looks to be a solid entry of our Vintage Historic race cars this weekend”, said Diane Dale, VARAC’s Director of Communications.  “We expect to see a number of MGs, Historic Formula Cars, a couple of Mallocks and some Porsche and BMW to throw into the mix.  Last year there was no race on our schedule at Shannonville Motorsport Park so we’re looking forward to returning to this great track.  It really suits our Vintage/Historic cars and we always have a lot of fun.”

Much excitement has surrounded this year’s event, named as the “Bay of Quinte Grand Prix”.  The local establishments and community have really helped promote the event and a lot is planned for the fans as well as the competitors.

In addition to the VARAC Vintage Historic racecars, there are six additional race groups competing at the event this weekend.  Ground Pounding GT cars, Formula Libre, Toyo Tires F1600 Championship Series, F2000 Canada Series, F1200 Series and Radical Canada will all be in attendance.  Food Trucks, Vendors and even a car show on the Sunday will provide additional entertainment.

During the week leading up to the race a number of promotions will take place in the surrounding areas including racecar appearances, radio ads, TV interviews and more.  Saturday night, the Lone Star Texas Grill in Belleville will host a Driver’s Party and will feature driver’s interviews, some ticket giveaways and the two event pace cars.  More information is available at http://bit.ly/1HPovm4 .  In addition the event can be followed twitter.com/BofQGP, facebook.com/BayofQuinteGP and Instagram.com/BayofQuinteGP.