NEW for the 2019 Regional Racing Season:

VARAC, the Vintage Automobile Racing Association of Canada,  will allow Club Fords (Formula Fords built up to 1981) and F1200 (Formula Vees) from any era to run on the Vintage Historic grids at CASC-OR regional race weekends.

For the last few years we have allowed Vintage Historic Formula Fords, as well as Vintage Historic Formula Vees to run on the VH grid at regional events so that they didn’t have to run on the Formula Libre grid.  Starting in 2019 we are extending this permission to Formula Fords built up to 1981 and to any Formula 1200 car.  The reasoning is quite simple.  First, both of these types of cars fit quite well for size, weight and speed with our VH cars.  Second, many of the drivers of these cars have decided to “park them” rather than run on the Formula Libre grid.  Having already made the exception for the our older cars, it was easy for our membership to extend the exception to Club Fords and Formula Fords.

If you have a Club Ford or a F1200 and you would like to find out more about these changes please send me an e-mail at ted.michalos@varac.ca.

We’re looking forward to the 2019 racing season – see you at the track!

The October 2018 edition of Pit Signals by Jeremy Sale is available. 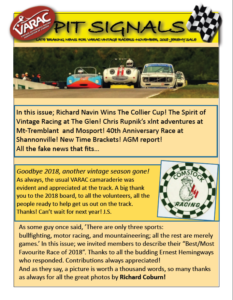