Images from the DAC Trillium Trophy Races at Shannonville Motorsport Park on May 25-26, 2013

TORONTO, ON (May 23, 2013) – Following a very successful BEMC Spring Trophy event three weeks ago the Vintage Automobile Racing Association of Canada (VARAC) competitors will compete in the second event of the season this weekend (May 25,26) in the DAC Trillium Trophy Races.

Competitors from all across Ontario and Quebec will be competing in the Vintage/Historic and Group 70+ grids which host a wide variety of historic race cars. This weekend you’ll see MGs, Sprites, Alfas, Porsche, BMW, Mustang and Corvette as well as classic open wheel cars such as the Bobsey Formula Vee, Merlyn mk Eleven, Lotus and Mallock.

The DAC Trillium Trophy Races is the second VARAC points race of the year and is the final tune-up to VARAC’s much anticipated Canadian Historic Grand Prix taking place on June 14-16 at Canadian Tire Motorsport Park, celebrating the Rothmans Porsche 944 Challenge Cup as the feature.

VARAC is the Vintage Automobile Racing Association of Canada whose members share a desire to preserve, restore and race historically significant cars in a form as close to the original specification as possible. We race cars made in 1989 or earlier in Ontario and Quebec. The highlight of our season is the Canadian Historic Grand Prix held in 2013 on Jun 14-16 at Canadian Tire Motorsport Park. 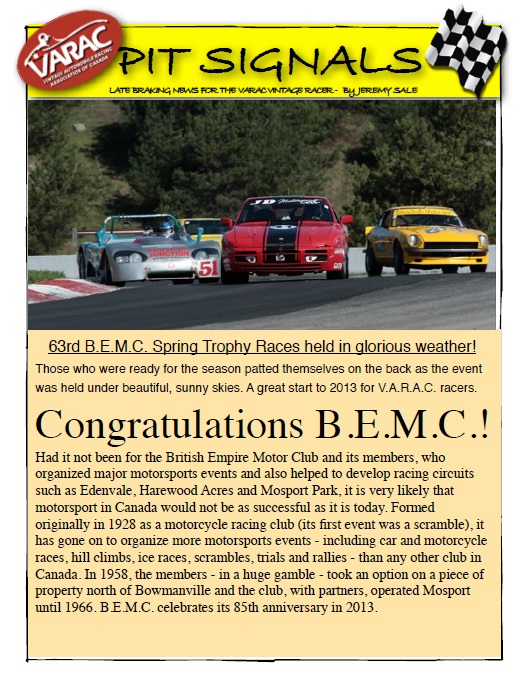 The May 2013 edition of VARAC Pit Signals by Jeremy Sale has been released! Click here to download your personal copy.