The Vintage Automobile  Racing Association of Canada will hold its annual event at Canadian Tire  Motorsport Park on FATHERS DAY WEEKEND from June 14 to 16, 2013 on the  Mosport Grand Prix Circuit – Canada’s Home of Motorsport.

Participating racers from  across Canada and the US will converge on the Toronto area track to compete in  three days of racing in six race groups:

Join us this coming  weekend June 14-16, 2013 for a dream Fathers Day weekend.  There will be fabulous racing action  with over 200 vintage and historic cars in six race groups battling for the  honour of a sharing the podium and receiving trophies from Canadian Racing  Greats, Eppie Wietzes, Ludwig Heimrath, Bill Brack, Craig Fisher, Gary Magwood  and Walt MacKay.

Friday June 14th – Bring your classic car out on Friday  evening to the “Checkered Flag Cruise” to be held right in the  middle of all the action of the racer’s paddock – walk where championships have  been decided and the world’s greatest drivers have taken the Checkered  Flag.  The Cruise will start at  5:30pm and the entry is free.  The  Cruise will combine Hot-Rods and Muscle Cars with Sports Cars and Race  Cars.  In addition to witnessing  this fantastic Cruise Event, attendees will have the opportunity to explore the  paddocks and see what a great spectacle the VARAC – Canadian Historic Grand Prix  presents. Souvenir Dash Plaques will be provided to all cars entering the  Cruise.

·         From  10:30am, join the fun at the Marquee Tent for The Toronto Star “Great  Canadian Racers’ Reunion” and “Legends of Mosport”  hosted by Wheels Editor, Norris  MacDonald
·         Join  in the “Meet the Fans and Press” Session and Panel Discussion. Welcoming  fans and anyone involved in racing over the years to come out and meet old  friends and celebrate racing at Mosport, Canada’s Home of Motorsport.
·         Gary Magwood, Canadian Racing Champion will MC “The Legends of Mosport”, featuring our  greatest drivers.  So, come out and  hear what these Champions who formed Canadian racing have to say, get an  autograph and meet them personally.
·         The  “Field of Dreams Car Show” presented by Liquid Wrench also takes place on  Sunday Morning from 9am on the infield at Corner 8.  A special admission rate of $20 per car  applies to those coming in for the day and entering the Car Show.  Souvenir Window Cards and Dash  Plaques will be provided to all cars entering the Car Show.
·         Dream Laps Parade – The noon-hour parade laps are an  annual favourite.  We will continue  that tradition this year by offering Car Show attendees the opportunity to  register ($10 fee) on-site for the “Dream Laps” This is an experience that you  won’t want to miss and the largest on-track classic car parade in  Canada
·         Co-Grand Marshalls,  legendary Canadian Racer, Ludwig Heimrath and 944 Cup Series Founder and  competitor, David Deacon will officiate the running of the Porsche 944  Feature Race and present the trophies on Sunday afternoon.

With all of this racing  action and the variety of ways to participate, you won’t want to miss  THE GREATEST SHOW ON TARMAC! , the VARAC – 2013  Canadian Historic Grand Prix on the Mosport Grand Prix Circuit at  Canadian Tire Motorsport Park, June 14 to 16, 2013.

VARAC member Jeremy Sale writes about the 50th anniversary of the Formula Vee in the June 2013 edition of Inside Track Motorsport News.

Already in your mailbox (if you’re a VARAC member), on sale now at your newsstand, order a subscription or obtain a digital edition. 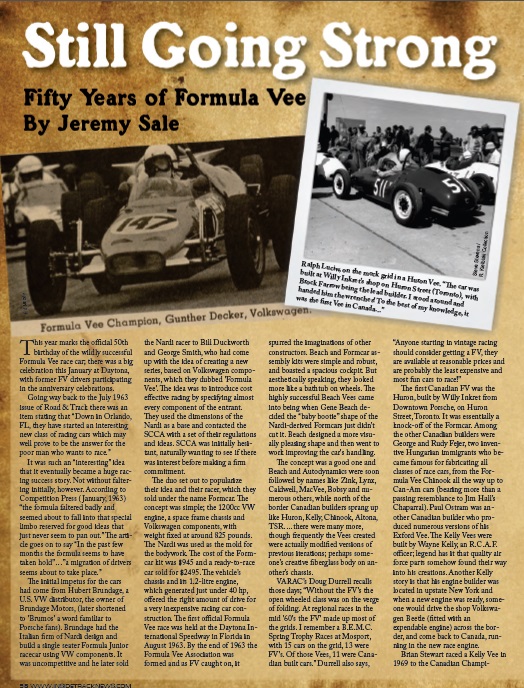