As part of the annual VARAC Vintage Grand Prix, and all of our events at Canadian Tire Motorsport Park, we get to enjoy driving the renowned “Mosport Grand Prix Track“.

This high-speed 3.957 km (2.459 mi) circuit comprises 10 turns and several dramatic elevation changes that confront drivers with an exciting variety of challenges on every lap.

Here are some tips & videos from a couple of our VARAC members.

Corner One is a typical Mosport corner….. it is both blind and falls away as you enter. Keep the car to the left on entry and take a smooth arc to a late apex. This is a 4th gear corner for most MG’s, with only light braking or a comfort lift needed after you are familiar with the corner. Taking it flat is possible but scary and doesn’t seem to gain any time in an MGB, while the faster cars will definitely have to brake as their speed down the front straight is so much higher. At speed, you will use the entire track surface on exit and be careful not to drop a left side wheel off as recovery is difficult with the rough terrain and the long concrete strip can catch low slung cars. Further the cars following are arriving quickly and you will have to wait until it is clear to re-enter the track. After the mid-point in the corner you will start to climb the hill in a high speed section heading toward Corner Two. A unique caution here is to avoid the yellow blend line on the right that defines the Pit Out. At Mosport (unlike Watkins Glen) it is not permitted to cross or even touch that line, and expect to be reprimanded if you do. Normally this would only come into play if you are trying to pass a slower car (or two) on their right.

Corner Two is Mosport’s signature corner and is another high speed, blind entry corner which then falls away from you almost immediately as the track makes its way down the hill. It is a double apex corner that is tighter at the beginning and then opens out on exit. Most MG’s will be in fourth gear as you approach and complete this turn. Do not brake too late into the turn as the car is light and you can fall off the track to the right. You need to complete braking before the corner with grip diminishing in a hurry as the surface falls away. An experienced professional once told me to brake more than you think going in (the braking zone) then add speed (if you think you can carry more speed) with smooth throttle as you approach the first apex. Speed continues to build as you descend the hill and momentum will pull you across the track to the right as the track continues the radius. As the car settles, ease it back to the left continuing with smooth throttle and clip the second apex. Smooth to full throttle after the apex and use all the track width to exit right. New paving off the racing surface may help recover some control in an “off” here but full recovery is uncommon as there are walls on both sides and you are at high speed. Continue up the hill at full throttle and gradually move to the left side of the track in preparation for Corner Three.

Corner Three looks relatively easy after the previous two turns, but is much tighter at the beginning than it looks and then opens up on exit. This is a 3rd or 4th gear corner for most MG’s depending on rear axle, max revs, etc. This is a blind late apex corner so do not turn in too early as you can quickly run out of track. It is possible to brake a little later here, because of the hill. Be careful of the “marbles” on the outside of the surface, but there is usually room to control the car if you slide off.
After the apex, smoothly apply throttle as soon as possible, at MG speeds there is lots of track at corner exit on the left. If you don’t have the speed to carry you all the way to the left side of the track, it isn’t necessary to steer there as shortly you will be easing to the right side of the track to prepare for Corner Four.

Just when you thought Corner Two was the only high speed and blind steep downhill late apex turn, here comes another called Corner Four. Do all your braking before entering this turn to maximize grip. Enter under the overhead bridge about mid-right on the track. Most MG’s will be in fourth gear. Steer left to a late apex and shoot down the hill as straight as possible. This is the fastest part of the track for many small bore cars (it depends on the driver of course). As you charge down the hill you can see the hairpin corner approaching. Braking can be a little later (with practice) as there is a steep uphill and downshift (3rd for me) going into Corner Five. Don’t overdo it as there is an outside wall and little room for corrective action if you cannot make the turn.

Corner Five is the hairpin and consists of turns 5A, 5B, and 5C. Turn 5A is an uphill sharp right with the apex just before the top of the hill. The exit point of 5A, which you can’t see until you are almost on it, is followed by a small straight before turn in point for another right called 5B. You will need to brake before turn in for 5B and for most MG’s a downshift to 2nd gear is called for. I was told once that no matter how early you turn in for 5B you won’t make it. This isn’t quite true but is a good thing to remember as you want to be smooth and on the throttle as early as possible heading onto Mosport’s longest straight. Just before the entering the straight there is a slight left turn known as Turn 5C. This is not usually an issue for our cars as our speeds are not high at that point, and is full throttle. An important note here is this area is treacherous in the rain, especially if you have a locked rear axle. In wet conditions, this part of the corner demands extra respect.

The Andretti Straight, including Corner Six and Corner Seven

The straight actually isn’t, as it is uphill all the way and also contains Corners Six and Seven, although few MG’s will reach the speeds where they are even noticeable. Slower cars generally migrate to the left side, allowing faster cars to pass on the right. This is not a rule and all cars have equal access; however, for comfort sake if slower cars are on the left then they will know which side the quicker cars are coming. Furthermore you need to be on the left side of the track as you approach Corner Eight. Cars driving on the right will notice as you approach the crest of the hill (near the marshal station) the road bends to right and the car will move to the left side of the track without turning the wheel. Here you are at maximum speed as you begin to approach Corner Eight. At this point the turn is blind (of course), hidden by a rise in the road. As you crest the rise you can easily see the fast sweeping right hander that is Corner Eight.

Corner Eight is a very fast top gear right hand sweeper with a (very) late apex. This is approached from the left side of the track and some braking is required to slow the car down and for most MG’s this will still be a strong 4th gear entry, then steady throttle to the apex. Taking this too wide will prevent you from bringing the car over to the apex, and turning in too early will cause you to run out of road. After hitting the Turn Eight apex, almost immediately begin hard braking (and down shift to 3rd) as you stay on the right side of the surface in order to negotiate the left hander Corner Nine.

Corner Nine is basically a throw away corner to maximize Corner Ten speeds, especially at exit, paying benefits all the way through to Turn Three. After hard braking leaving Turn Eight apex, downshift into 3rd gear and make a sharp left into Corner Nine. (Watch your mirrors here as sometimes you get drivers coming up inside left to try a dive bomb pass. If passing cars come in too fast, they usually cannot make the left cleanly and you can often regain the spot) Hold the line on track left, then staying left on the short straight accelerate briefly before braking for the right hander which is Turn Ten, all usually completed in 3rd gear. Use caution with the Pit In blend line on the right – crossing it will generate a reprimand.

Turn Ten is a 90 degree right leading onto the front straight and Start/Finish line. This is taken in 3rd gear with a slightly late apex on the right. Exiting the corner, the car will go to the left side of the track which, despite a concrete strip is quite easy to fall off if you over-cook it and carry too much speed on exit. After exit, apply maximum acceleration under the Start/Finish right through until you prepare to enter Corner One.

That is a lap of Mosport in an MG, now try to wipe the grin off your face… and do it again… 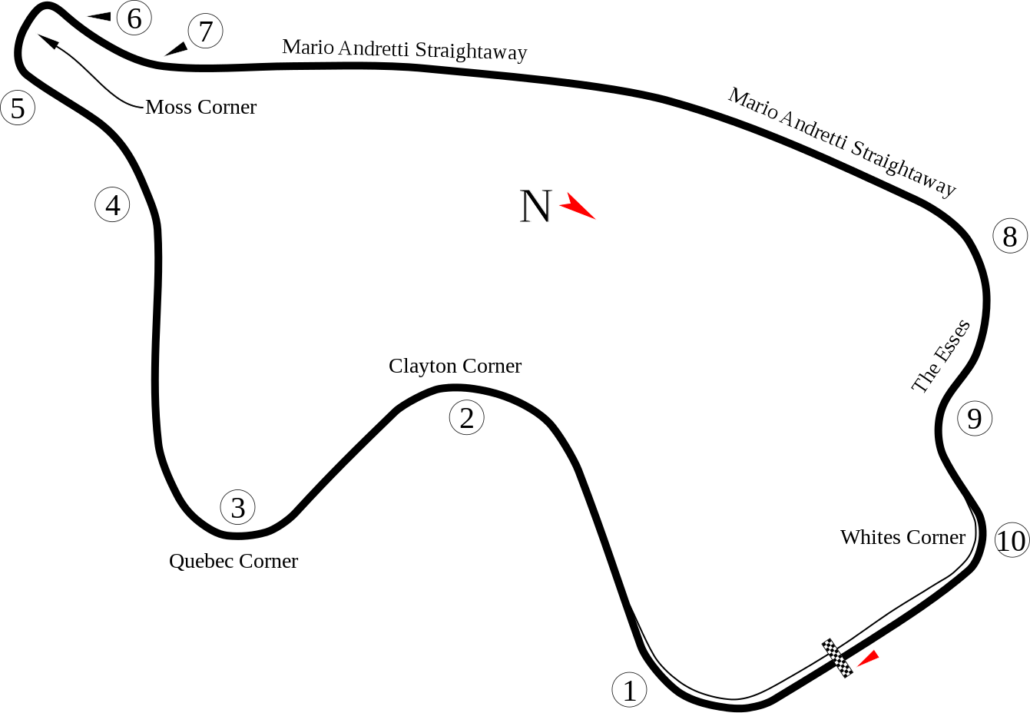