The Canadian Historic Grand Prix is honoured to have to so many photographers clicking their shutters at VARAC’s annual event.

Below is a growing list of photography links we have assembled from the 2015 CHGP featuring Formula Ford and will continue to add to.  Please be sure to contact the photographers if use of their photos is desired.

Canadian Tire Motorsport Park has released a video with fantastic coverage of the 2015 Canadian Historic Grand Prix including an interview with the 2015 Grand Marshal Gary Magwood.

Grab your lunch and join Norris at noon on Sunday in the centralized Marquee Tent as he interviews Canadian racing greats of times gone past.  Featured drivers are meant to include:

We look forward to seeing you there!

Bowmanville, ON – The VARAC Canadian Historic Grand Prix which will be held June 19 -21 at Canadian Tire Motorsport Park is proud to be supporting Prostate Cancer Canada’s Wear Plaid For Dad initiative at the track on Friday, June 19.

“Many of our member’s have been directly or indirectly impacted by Prostate Cancer at some point in their lives”, says Diane Dale, communications director for VARAC, “It is with great pride that VARAC’s Board of Directors is pledging to Wear Plaid For Dad on our first day of our race weekend, and we hope that all the competitors will join in with us”.

Prostate Cancer Canada is expecting thousands of Canadians to put on something plaid to help raise awareness and funds to protect men from prostate cancer this Friday. Celebrity and high profile greats such as Don Cherry, vice Admiral Norman, Dave Thomas and John Catucci have backed this initiative and social media is alive with the support.

It’s a fun and easy way to help protect men from prostate cancer. And when you pledge to wear plaid, Bayer will generously donate $8 in honour of the 1 in 8 men who will be diagnosed with prostate cancer in their lifetime.

Join us and pledge to wear plaid  www.wearplaidfordad.ca

TORONTO, ON (June 17, 2015) – The Vintage Automobile Racing Association of Canada (VARAC) is gearing up this weekend for the Canadian Historic Grand Prix, one of the most prestigious events on the Vintage and Historic Racing Calendar in North America. Racers from across Canada and the United States will descend on Canadian Tire Motorsport Park just north of Bowmanville, Ontario with their Formula Fords, MGs, Triumphs, Jaguars, Porsches, Alfa Romeos, Lotus, Minis, Corvettes and more to challenge the world famous Mosport Grand Prix Circuit. Mosport is one of only three true historic Grand Prix tracks in North America along with Le Circuit Mont Tremblant in Quebec and Watkins Glen in upstate New York.

Del Bruce, president of VARAC says “Open-Wheel Formula Ford Racers will be the “Featured Marque” for 2015 and will compete for the Oliver Clubine Memorial Trophy in honour of Ollie Clubine, a champion and pioneer of Canadian Road Racing.  We have invited one of Canada’s greatest Formula Ford Aces, Gary Magwood to be Grand Marshall for the weekend. IT promises to be a great weekend of racing!”

VARAC is the Vintage Automobile Racing Association of Canada whose members share a desire to preserve, restore and race historically significant cars in a form as close to the original specification as possible.  We race cars made in 1994 or earlier in Ontario and Quebec.  The highlight of our season is the Canadian Historic Grand Prix held annually in June at Canadian Tire Motorsport Park.  The 2015 CHGP will feature Formula Ford.

Who would be crazy enough to fancy driving across Canada in an almost 50-year old car? And we’re not talking about using the Trans-Canada Highway! Dave Clark and Dave Myers have restored a 1967 Volvo 122S and are retracing the original Shell 4,000 Rally route right across Canada, with a stop at the Canadian Historic Grand Prix at Canadian Tire Motorsport Park, which as “Mosport” was a Special Stage in the rally years ago.

The following link is a copy of the article written by VARAC member Jeremy Sale for Inside Track Motorsport News:

Diana Carter and Gillian Field got a bit stuck in their Volvo 122S in the 1964 Shell 4000, but made it out and finished 24th overall, 11th in their class. The Canada 5000 car is the same colour, is also a four door and will definitely be drawing some inspiration from this car! Photo courtesy of Shell-4000-Rally.org and Canada5000.ca 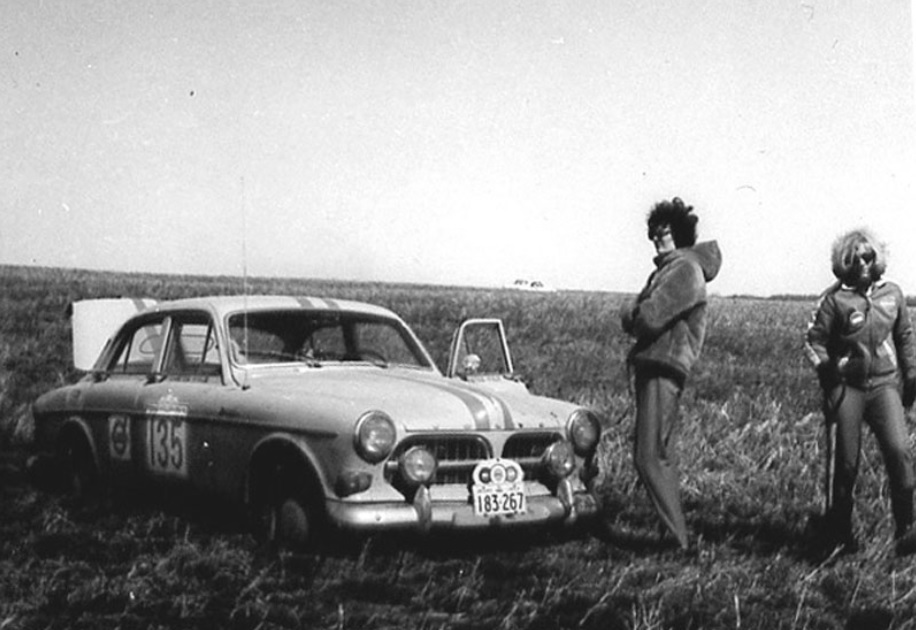 Vintage auto racers from across North America will be taking over the Canadian Tire Motorsport Park June 19 to 21, and Ajax resident Bill Bovenizer will be there front and centre, nearly 50 years after his first race back in 1966.

Seventy- year-old Bovenizer made his racing debut in an MGB in 1966, and he hasn’t quit yet! In 2015 he will be racing in a 1968 Titan Mk III Formula B Racecar at the Canadian Historic Grand Prix at the former Mosport track.

The Grand Prix, hosted by the Vintage Auto Racing Association of Canada (VARAC), is one of the most prestigious events on the Vintage and Historic Racing Calendar in North America, says Del Bruce VARAC President and Race Director. It is the largest and most popular event of its kind in Canada and counted as a “Major Spectator Event” at Mosport since 1999, says Bruce.

Open-Wheel Formula Ford Racers will be the “Featured Marque”for 2015 and will compete for the Oliver Clubine Trophy in honour of Ollie Clubine, a champion and pioneer of Canadian Road Racing.

Vintage Auto Racing Association of Canada (VARAC) is staging what promises to be the largest ever such contest in its history.

In addition to the Formula Ford Feature, racing fans will once again be thrilled to witness a huge grid of fast Triumphs and MGs piloted by drivers from across Canada and the US, returning to vie for the claim of victory in the Triumph vs MG Challenge.

When Bovenizer decided to get back into racing “It had to be in a real race car, and formula (open wheel cars) have always been my passion.
“I love the old and new friendships and the atmosphere of the vintage racing. The Canadian Historic Grand Prix is the highlight of the year and 2015 will be a great one. Come and see some wonderful cars at one of the world’s great race tracks, Mosport!”

The Canadian Historic Grand Prix is about more than on-track racing, says Bruce., adding spectators and car enthusiasts of all stripes will enjoy the scope and scale of experiences open to their participation on the weekend.
These will include”

The public is welcome to attend the Grand Prix, says Bruce. Fans can wander around the paddock and meet the drivers all weekend. Tickets are $30 for the weekend Super Ticket, $20 for Sunday only. There is racing on Friday, Saturday and Sunday.