You know how they always say “the car is the star” in vintage racing, right? Well, this summer I had a chance to be a star off the race track for a change!

No sooner had we returned to Kingston from the double race weekends in Pittsburgh, than Ed Luce (my driver) was contacted by Ted Michalos, who had been in touch with a set decorator who needed to source a ‘vintage F1 race car’ for a commercial being filmed in a week’s time. As if one of those high-maintenance divas could have pulled this off. You know that type, all big noise and fast moves – real ‘Broadway musical’ – while this was going to require some restraint and subtlety for the small screen.

Unfortunately for the set decorator, the weekend scheduled for filming was also the BARC race weekend at Mosport and most of the more local cars were thus unavailable or uninterested. As we weren’t going to be competing that weekend, Ted wondered if we might be interested in appearing in a TV commercial!

After a lot of next-to-last-minute calls, it was decided that we would go to Toronto for a two-day ‘shoot’, where I was to be driven by a professional driver in a Nissan commercial. (You know how the fine print under those TV commercial scenes always says ‘professional driver on closed course’? Well, this was one of those scenarios.) I was to lead a parade of unusual vehicles up a suburban street, where a new Nissan would avoid backing into us thanks to its ‘driver assistance’ aids… 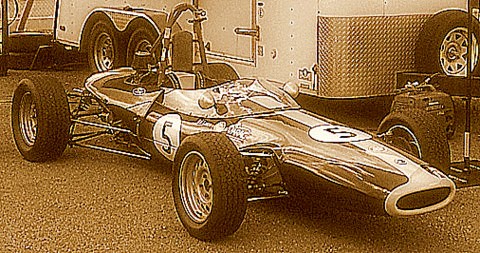 Of course, I’m no F1 race car but, as I said, a high-strung performer like that would not have suited this task at all. Fortunately, at a glance I look a lot like pretty much every other competition car that Lotus made in the mid 60’s, and I can idle along as low as 20 mph.

I spent a couple of days in make-up, first having my usual suite of CASC-OR, VARAC, etc. decals removed and my badges covered. (When making a commercial they don’t like having any other company’s logo’s, trademarks, names, etc. in shot. I suppose it’s a combination of not having license to use those insignia and not wanting to give anyone else free advertising.) Then I had a ‘flame job’ applied to accentuate my nose – already one of my best features. 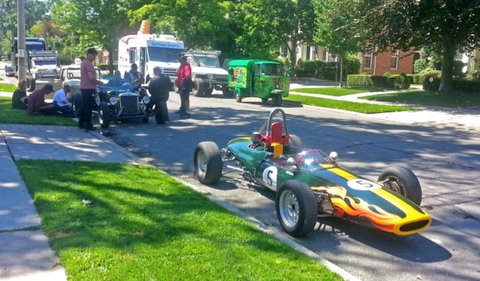 Ed’s concerns about the noise levels of my un-muffled exhaust were rendered moot by the appearance on-set of an immense Peterbilt 389, a ’34 Chevy rat rod with straight pipes, and an honest to goodness M60-A3 ‘Patton’ main battle tank. 12 cylinders of barely muffled, air-cooled, twin turbo Detroit diesel make quite a racket on a city street. But a little three-wheeled Italian ‘Piaggio Ape’ delivery scooter probably made the most noise/bhp of anybody there. How can a single-cylinder air-cooled engine make so much noise? By revving flat-out to keep up with the blistering 29 mph (top speed!) pace dictated by the M60, that’s how.

The low speed of the filmed parade was a problem, as expected. By the end of a few takes, my fluid temperatures were soaring due to a lack of air through my heat exchangers, and my clutch was aching from being slipped pretty much constantly to keep speeds down so that the tank could keep up. Thanks goodness for my relatively high ground clearance, as there was construction on the route around the block and we had to maneuver over some of those 1-1/2” steel plates they use to cover open tank traps in the street. (The tank just backed down the set after each take anyway. Those babies don’t corner well!)

In between takes, every little kid in the neighborhood wanted to sit in the driver’s seat and have their picture taken. Lots of happy locals may have helped to smooth things over and make up for the noise and dust. And Ed got to talk to quite a few people about VARAC, vintage racing, how wonderful Formula Fords are, etc.

As part of the crew for this experience my driver Ed got to learn a bit, helping with what my regular crew Dorothy does routinely – helping the driver into the car, steering wheel on, belts on, connect battery (wait for the director to say “camera rolling” to start my engine), switch over to internal battery. Then grab the starting battery and run into the bushes or down a driveway to get the heck out of shot while we stampeded up the street on cue.

After two days of shooting, it was back into my trailer (every film star has a trailer, don’t ya know). While this was all fun, I can’t wait until the next race weekend for a chance to blow the carbon out of my cylinders and to stretch my legs!

This summer VARAC joins with Mosport to celebrate the tracks 50th year of hosting world-class racing including Formula One, Indy cars, USAC, Can-Am and Trans-Am and more recently the North American Le Mans Series. In June 1961 the track opened the gates for its first major race, the Player’s 200 for sports cars. The race attracted over 40,000 spectators and was won by Stirling Moss in his 2.5 litre Coventry Climax-powered Lotus 19. In the following years a small selection of the famous drivers who competed at Mosport would include; A.J. Foyt, Denny Hulme, Bruce McLaren, John Surtees, Mark Donohue, Jim Clark, Graham Hill, Jack Brabham, Bobby Unser, Roger Penske, Dan Gurney, Jackie Ickx, Jackie Stewart and many, many others, including of course the great Gilles Villeneuve, who made what would turn out to be his last appearance at the track, as he drove a Ferrari in the 1977 Labatt Grand Prix won by Jody Scheckter in the Canadian Wolf. Even the great World Champion Juan Manuel Fangio drove at Mosport, in a bizarre celebrity Mini race.

In addition to the “Cars of Italy” and “Those Amazing Porsches” there will be plenty of other classes and cars to see from the golden era of racing; Jaguars, Fiats, Triumphs, Daimlers, Alfas, Minis, Lotus, Austin-Healeys, Sadlers, Sunbeams and many, many more including formula cars and sports racing cars. The 2011 VARAC Vintage Racing Festival celebrates the glory days of grassroots sports car racing with three full days of spectacular on-track action. Hundreds of cars and drivers from all over Canada and the US will contend with this challenging race track as it rises and falls through the beautiful park setting, competing just for the thrill, the fun and bragging rights, in true amateur fashion.

The VARAC Festival is about more than racing. This year VARAC has added a new event on Friday evening – the “Checkered Flag Charity Cruise”, which is open to anyone for a two dollar donation per car to the VARAC charity.  The cruise will be held on the Start/Finish Straight of the famed racing circuit and will give participants and spectators alike a glimpse of the excitement surrounding this race weekend.  The public is encouraged to come out for the cruise as well and join the party with admission being only the donation to the charity.

Other features of the weekend include largest Mini gathering, Mini Meet North as well as the “Field of Dreams” car show that welcomes sports cars and hot-rods and car clubs from far and wide with Sunday noon parade laps on-track. Entry to the car show and parade laps is free! That’s a lot of action and a super value!

Enjoy the relaxed atmosphere of the VARAC Vintage Racing Festival where you are encouraged to take it all in. Walk through the paddock and get up close to the cars and drivers who will be happy to greet you. Youngsters will enjoy meeting the drivers and being photographed with the race cars. Enjoy free camping. Explore the booths of vendors of all types. Within the park you’ll also find good food and beverage and modern comfort facilities.

Vintage racer, motorsport enthusiast or sports car owner, you won’t want to miss this event! Be sure to put it on your calendar today, June 17, 18, 19, 2011. For more information see our Festival section.